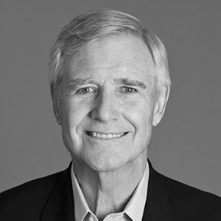 David seeks to balance family, work, and volunteer work, and sometimes succeeds. He is married to Elizabeth, a fellow lawyer who spent a decade working to provide benefits to parents, and has two daughters, a healthcare/biotech communications professional and an immigration lawyer in the San Francisco Public Defender's office.

David split his business career between government and the biotechnology industry. He was fortunate to be able to serve in senior positions in both state and federal government, including in the White House and in legal positions on the U.S. House of Representatives Committee, on the Judiciary, in a state legislature, and as a member of the California State Commission on economic issues and government reform. David has served on three committees for the National Academy of Medicine. He served as a senior corporate officer for long periods at both Genentech and Amgen. David is Managing Director of Bay City Capital, a San Francisco-based life science venture firm. He is active in the nonprofit world as a hospital board member (UCSF Benioff Children’s Hospitals) and is a frequent author of policy-oriented opinion pieces in journals such as Harvard Business Review, STAT News, Forbes, Morning Consult, The Hill, and Health Affairs.